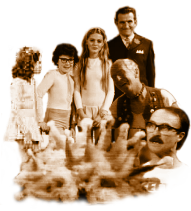 Welcome to Lunaviron, the home of the weird and wonderful British science fiction comedy series Luna.

Luna was a groundbreaking SF television series, not least in having a woman in the lead role. Noted mostly for the futuristic dialect used by the characters, it is fondly remembered by many who grew up in the eighties (and probably a fair few older viewers as well).

Lunaviron remains a work in progress, albeit very slow progress. Next up will probably be a full writeup for Environmental Ambience Stable, Wish You Were Here - hopefully before the end of the year! We'd love to hear from anyone who has any more information on the series, especially the second season with Joanna Wyatt (and in particular episodes 2.1, 2.3, 2.4, and 2.6). Do let us know if you spot any problems with the site, too. Email us here - gratitudes.

New: co-writer Colin Prockter tells us about the creation of Luna!

Oh, and Lunaviron is completed opposed to illegal uploads like this, and advises against watching them.